If there is a personality who has represented the paradigm of union between science, technology and art, that is Leonardo da Vinci, who created the first humanoid automaton known to us, who of course, had military purposes.

In the case of Leonardo di Ser Piero da Vinci (1452-1619) his particular circumstances merged his outstanding intellectual abilities with some special conditions that allowed him to develop his talent. The illegitimate eldest son of the notary Ser Piero da Vinci, who had carved outa brilliant career at the service of the noble Florentine families, he had no access to the formal training receivedby his legitimate step brothers who were born later through successive marriages of his father. Nor it was within his reach to follow the professional steps of Ser Piero. On the contrary, Leonardo grew up in the countryside, in Vinci, a small Tuscan village located a few kilometres from Florence under the care of his paternal grandparents and his uncle Francisco, observing nature and learning from it, unaware of the academic dogmas of the age. This alsohelped him prevent his left handedness from being corrected.

His career as an artist began in Florence as an apprentice in the workshop of Andrea Verrocchio, position that he got thanks to his father. He remained there until 1482, when he moved to Milan to work at the service of Ludovico Sforza, mainly as an engineer. Just as an important assignment for his master, an equestrian bronze monument, was about to materialize, he had to leaveMilan after the fall of the Sforza dynasty in 1499 at the hands of the union of forces between Cesare Borgia and Louis XII of France. After working for a decade in theproject, the bronze had to be used for the manufacture of guns to fight against a defeat. 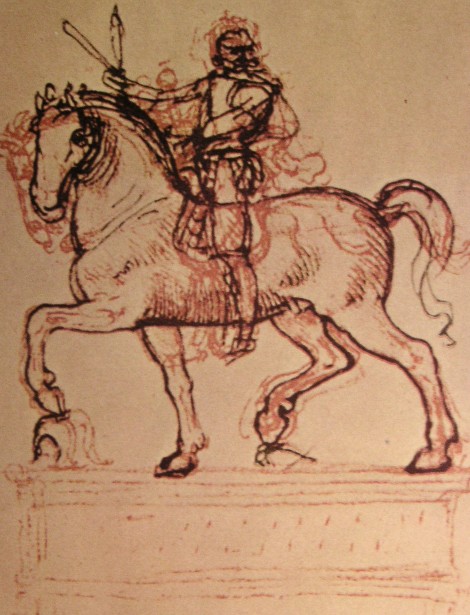 Sketch of equestrian monument designed by Leonardo for the Sforza family in Milan. Public domain photo.

In 1957, at which time the fifth centenary of the birth of Leonardo had already been celebrated, the Italian historian Carlo Pedretti discovered sketches made around 1495 for the manufacture of a mechanical knight for defensive purposes. Inside a German-Italian medieval armour, there were a series of mechanisms that allowed the robot to stand, sit, move his arms, neck and lift the visor of the armour through a system of pulleys and cables. 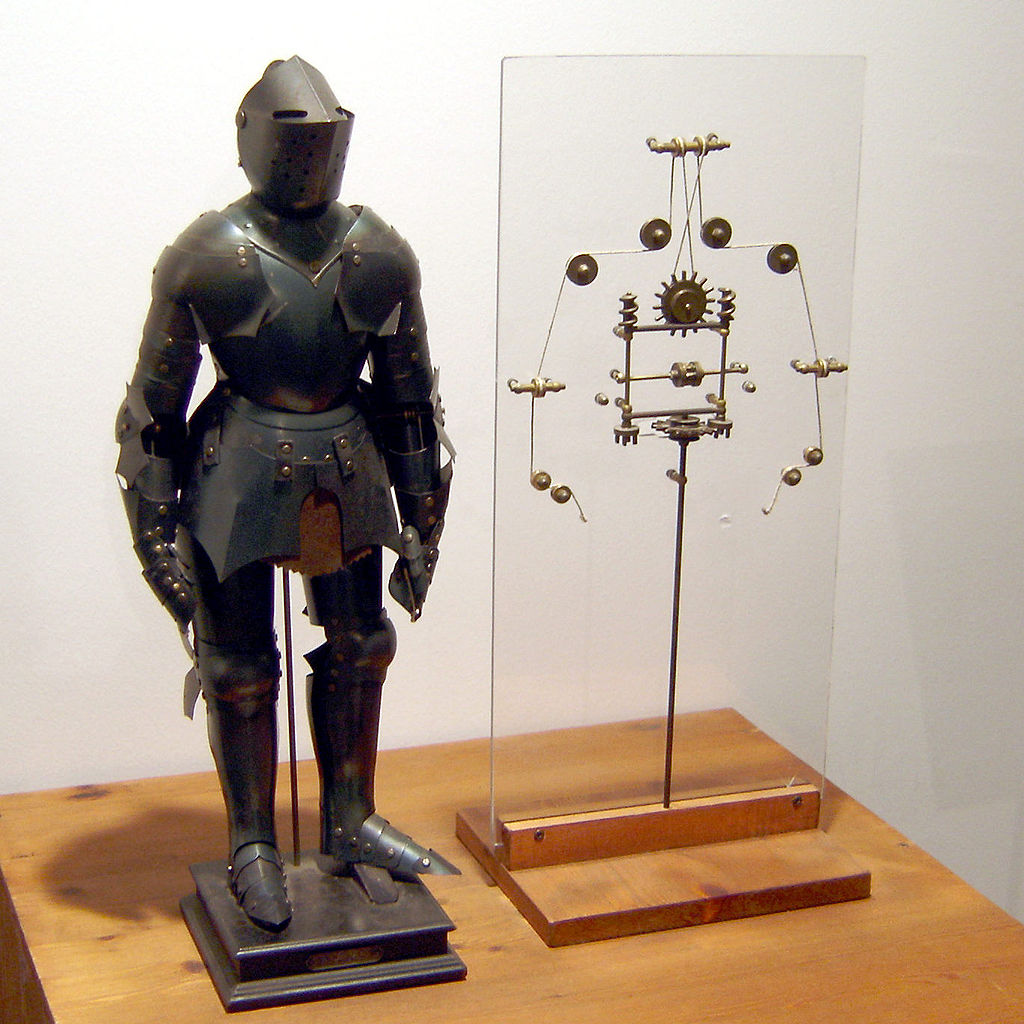 It is not known whether any prototype of this robot was made at the time, but in 2002 the expert in robotics Mark Rosheim transferred the mechanical knight to the 21st century, basing his work on the study of 14th century designs. Another pupil of Leonardo, Mario Taddei, technical director and researcher at the Centre for Studies Leonardo3 in Milan, which also has a museum, built another prototype in 2007, which was improved and included more information from Leonardo sketches. In both cases, the robot worked perfectly.

Unfortunately, war absorbs considerable resources, including scientific and technological development, to have an advantage over the opponent, and this was used at the time by Leonardo, both as a technological challenge and as a means of obtaining funding in order to develop his role as an engineer and inventor, one of the most rewarding for this dilettante of the Renaissance.

Today, we are fascinated and terrified in equal parts by humanoid robots for military purposes like Atlas, created by the company Boston Dynamics for DARPA (Defense Advanced Research Projects Agency of the United States). They are all heirs, with 21st century technology, to the robotic soldier designed by Leonardo in order to face war with the fewest possible human casualties.