“An English engineer on holiday in France after Waterloo, discovers looms: programmable mechanisms!”. That is the beginning of the last track of “Un dígito binario dudoso” (An iffy binary digit), a record by Hidrogenesse dedicated to the mathematician Alan Turing in 2012, to celebrate the centenary of his birth. Turing is considered the father of artificial intelligence and computing and he was, up to the seventies of the twentieth century, an anonymous hero of the Allied side during World War II thanks to his work as a designer of a machine capable of decrypting messages generated by the German machine Enigma. In “Historia del mundo contada por las computadoras” (World History told by computers) they are the ones who take the floor and place the origin of computing at the time when the mathematician, engineer and philosopher Charles Babbage is inspired by the technology developed by the weaver and French merchant Joseph Marie Jacquard, who after several prototypes created a technology by which a loom could generate different patterns by using punched cards that were exchanged according to the work that had to be done.

However, this strategy was not new. Jacquard, family nickname which eventually replaced his real surname, Charles designed different looms and held several patents in the early nineteenth century, but he was aware that the design could be improved. A visit to the Conservatoire National des Arts et Métiers (National Conservatory of Arts and Crafts) in Paris helped him to get to know the work of his predecessors in depth, and improve his machine. Basile Bouchon used punched paper on the loom in 1725 to set the pattern for the fabric. Jean Falcon, Bouchon’s collaborator, replaced the paper by a chain of punched cardboard cards to change the work schedule faster. Another one of Jacquard’s inspirations is directly related to the origins of robotics: a fully automated loom set up in 1745 by his fellow countryman Jacques Vaucanson, who, before focusing on the textile industry had astonished Europe with his automaton flute player representing a musician shepherd and his mechanical duck that emulated the movements and vital functions of a real duck. 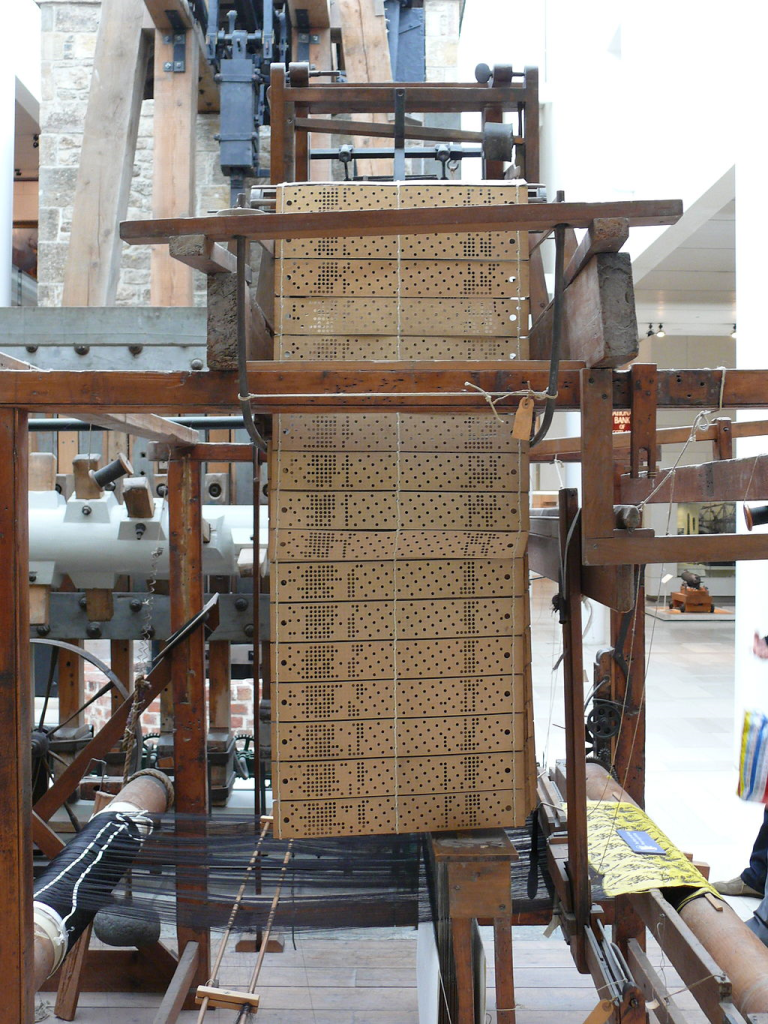 All this body of knowledge developed to make the textile industry more efficient, is what Babbage found in France, a country that had been through a serious conflict until 1815 because of the Napoleonic Wars. As a passionate fan of mathematics and precision, in the early twenties of the nineteenth century he designed differential machines to calculate and print mathematical tables automatically and thus avoid human error. These ideas were so well received by the British government that they funded the development of these devices. But Babbage’s vision went beyond that, and he realized that what was really interesting was to create machines that could perform different operations depending on the user’s needs, that is, that they were programmable. Thus he begins to focus on a new project which he calls analytical machine, which applies the ingenious solutions that the French had already used for the looms, especially the use of perforated cards as a way to direct the work of the machine. Despite his efforts, he failed to complete his analytical
machine and he lost a lot of money. He was lucky to inherit a considerable amount when his father died in 1827, but still the materials and technology of the time did not help his ideas to succeed. Neither did the State, that did not seem to find this 19th century cutting-edge invention that has never been competely developed, profitable enough to fund its development. The influence of Babbage is limited in the history of computing, although he achieved another great success: the development of the first computer program by the mathematical and writer Ada Lovelace, his collaborator and friend, who designed an algorithm for this machine which, of course, never had the opportunity to be tested. About a century later, computers and algorithms in which current devices are based began to be developed. The Industrial Revolution would be replaced in the twentieth century by the World Wars and their aftermath as an incentive for the development of computing and information technology.