Cinema has helped, from its very beginning, not only to capture real stories, but also to unleash our fantasy, introducing all kinds of mythical characters and fantastic situations. These categories include, in addition to characters from popular culture or mythology, of course, robots or automata, fictional characters product of technology.

Already present in classical mythology, the first robots appeared in proper literature in the early 19th century with The Sandman (Ernst Theodore Amadeus Hoffmann, 1817), a short story in which a terrifying character creates a female robot called Olimpia.

In the film industry, robotic roles did not take too long to appear due to obvious technological reasons. The first short film known to us which includes a robot among its characters was  The Mechanical Statue and the Ingenious Servant (J. Stuart Blackton, 1907), but only a year later the first feature film appeared: The Fairylogue and Radio-Plays (Francis Boggs, Otis Turner, 1908), starring Tik Tok, the Tin Man that viewers would see 31 years later in The Wizard of Oz (Victor Fleming, 1939), since it was the first film adaptation of The Wonderful Wizard of Oz, Lyman Frank Baum’s novel for children, which was published in 1900.

If there is a single character who symbolizes Christmas from the 20th century onwards (with the permission of its historical and biblical protagonists) that is definitely Santa Claus, a popular incarnation of St. Nicholas of Bari (St. Nicholas of Myra in Eastern cultures) who has the role of handing out toys to children at Christmas. However, the character of Santa Claus took a little longer to appear in a feature film, although it is true that his current looks date from 1931 thanks to Haddon Sundblom, an illustrator hired by Coca Cola for advertising purposes. 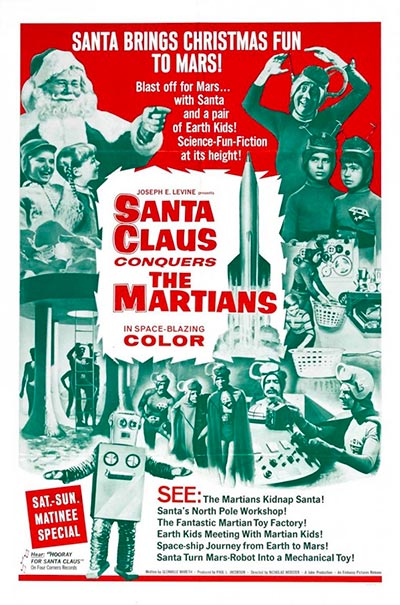 It will be Mexico, however, the country that has the honour to give birth to Santa Claus (René Cardona, 1959), that would have its corresponding version in the United States only a year later. The following film starring the kind Christmas character, Santa Claus Conquers the Martians (Nicholas Webster, 1964), will have a completely different tone and circumstances and has a peculiarity: it is the first Santa Claus-robot interaction in the history of cinema.

This science fiction story outlines the state of the space race and the Cold War at the time, through a Martian expedition to kidnap Santa Claus, because the Martian children are very sad and, according to the wisest and oldest Martian, the presence of Santa Claus on his planet would be the perfect solution. Martians, much more technologically advanced than humans (though colder and less emotional), count among their great display of resources with the huge and “threatening” robot Thor, neutralized by Santa’s candour and good humour.

The film, with a very low budget, a hilarious production design and a curious script, constitutes an interesting exercise for the analysis of the stereotypes of the time and a source of scientific references (within its particular context) relative to the contingencies of space travel. For all these reasons, it is a Christmas classic, as well as of public domain, which should not be missed.

Although robots were already in films long before Santa Claus, when they happened to meet in the same story, they did it in style.