The great event of robotic cinema already has a set date

When we launched the Robotic Online Short Film Festival in April 2016, we were dreaming of developing a project that conveyed our passion for imagining a future where humans and machines would interact at a social level. After ten months, countless interviews, 56 short films and a trans-oceanic trip, we can say that we have almost achieved it.

During the last few weeks we have been working together with members of our jury, University and City Council agents, media (QUO and Radio 3), robots and everyday companions, to organize an event to give some physical presence to our online festival, so that the audience becomes more involved if possible. 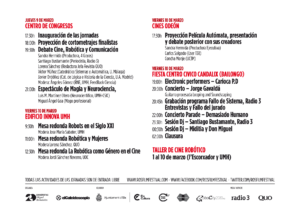 The Cinema, Robotics and Communication Sessions, as we have called this event, will be held on 9 and 10 March in different spots in the city of Elche, including the University Miguel Hernández or the Congress Centre. They will serve as a catalyst to give greater visibility to our concerns and to give a leading role to all those who are curious and who feel a similar enthusiasm for these issues that will soon be part of our daily lives.

We will hold a debate with first line professionals in which we will reflect on the questions posed by ROS Film Festival. How will we interact with robots? Will they become self-aware and emancipate from humans? What will being human mean in a highly technological future? We will also have the chance to enjoy several performances, from a magic and neuroscience show to a live Turing test, all sponsored by our most special collaborator, the robot Atenea.

We will have thematic round tables on robots and women, robotics in the XXII century and robotics as a film genre. Of course, there will also be screenings of short films and feature films and to end up with, a bit more of our idiosyncrasy: a party where we will have concerts, DJs and the expected jury’s decision which will be broadcast through streaming.