The other day I woke up startled. I had just dreamt about an acquaintance of my childhood and teenage years with whom I had neither a special friendship, nor was she part of my life, but I liked her. It was a peaceful sleep, we were chatting about trivialities when, just before I woke up I remembered that she had died some years ago. I am still unable to identify what thoughts or memories took me to make her appear in my dream. If we think of artificial intelligence, a field of research in which we emulate and try to improve human intelligence, the question is also how would the dream world work in future artificial brains.

During sleep learning consolidates, neural synapses are restructured and waste resulting from the high metabolic activity of the brain is eliminated. The accumulation of such waste could even lead to neurodegenerative diseases like Alzheimer’s. Would artificial brains need to carry out this process somehow, a sort defragmentation of their memory that gave them images and sensations during loading and stand-by periods, in case of having them?

Fiction has addressed this issue, especially when it comes to robots that are on the point of being equated with humans in terms of cognitive skills and self-awareness. In the film I, Robot (Alex Proyas, 2004), the robot more akin to humans, called Sony, has a recurring dream that is very important to the plot. This film, which produces a story taking elements from the universe created by Asimov about artificial intelligence and robotics, borrows this element from the story Robot Dreams, in which Elvex, whose positronic brain has been developed in a different way to the rest in a display of innovation by young robopsychologist Linda Rash, tells his creator that he has had a dream. She must decide, with Susan Calvin, her boss and colleague, what to do about it. 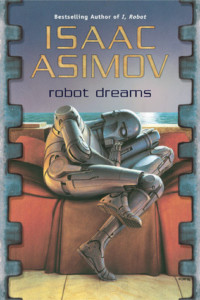 In other stories, precisely the opposite is assumed, the alleged inability to dream of intelligent machines. In the film Eva (Kike Maíllo, 2011), set in an imaginary city of Santa Irene, in which there is a leading Faculty of Robotics, the security key to a defective or potentially dangerous robot is none other than: “What do you see when you close your eyes?”. It’s a good security strategy because, as well as being a question which is not usually asked on a daily basis, it is assumed that a robot does not dream, it can have no vision if its optical sensors are not open and running. It is therefore a question to which they have no logical answer to avoid the deactivation protocol. It works perfectly.

In dreams are often remembered, in a faithful or modified way, recent or old experiences that we are even unable to recall consciously. In a wonderful scene which was not included in the final footage of The Iron Giant (Brad Bird, 1999) the viewer can have a glimpse of the giant robot’s dreams, who, because of a blow to the head when he landed on the Earth, does not remember his alien past that emerges unconsciously during sleep.

This unconscious vision of the giant robot even generates a signal that he is capable of reproducing on Dean’s TV, a friend and the owner of the auto wreckers in the town that has given him shelter. Nowadays there are research groups working on the possible visualization of dreams in humans, detection of signals that may be associated with different elements to better understand these processes. When the future in which this goal is achieved comes, in the case of machines these images will be much easier to obtain than in biological beings, which will leave them more exposed to human judgment.

In the film Prometheus the opposite is true. It is the robot David the one who profits from his technological advantage to become an “oneiric voyeur”. While the rest of the crew is in hibernation on their way to the moon LV-223, David remains active during those years in charge of the ship performing maintenance functions, cultivating his brain and watching films. So much free time allows him to use an interface to see the dreams of Elizabeth Shaw (Noomi Rapace), unravelling her past and motivations and establishing a special relationship with her.
The dream world is sometimes very private, thoughts and feelings arise that are difficult to share with others, even with people of our most intimate circle. If our intelligent machines were to dream in the future, would they want to tell us what happens in their dreams? And if we could visualize dreams thanks to technology, will it be convenient to record their dreams? Dr. Susan Calvin in Robot Dreams is very clear about it.